Now, more than ever, we need to support children and young people to help fulfil their potential. Studying physics opens up a huge range of opportunities for further study and careers and it’s never too early to start having conversations with your child about their future.

As part of the Limit Less campaign, the Institute of Physics (IoP) have recognised that more young people and their families to show them that physics is for everyone. That's why, during the pandemic lockdown, IoP teams across the UK and Ireland came together to create the Do Try This at Home series of short films and resources to help parents and carers with home-schooling. YouTube found these exciting videos so useful that they have also included them in their learning hub.

The films have been viewed 33,000 times, and were so successful that IoP went on to create home learning packs based on these films which were sent by primary schools around the country, as well as to 1,500 children at risk of digital exclusion. The films featured as part of the Bradford Science Festival, Lambeth Country Show, Big Bounce Festival and Caledonian Road Festival – where packs were also sent to 500 families on the Bemerton Estate.

Of the parents and carers we surveyed, 97% said they would recommend our films to a friend and 54% said that without our films they would not, or probably not, have tried similar experiments.

We want to share these great videos with you. They are aimed at parents, carers and children and give lots of ideas on how to see physics in action. It's the perfect holiday activity for the whole family, with more than a dozen to see - so clear the schedule and have a go!

Here is one of the “Do Try This at Home” episode you can watch now. 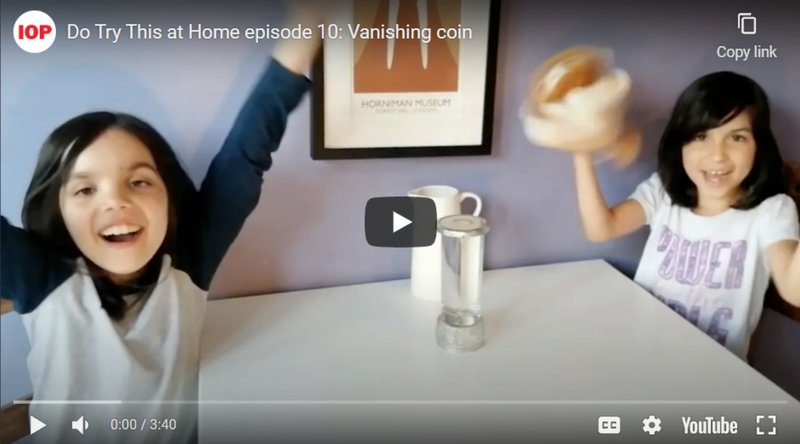 We use necessary cookies to make our site work. We’d also like to set optional analytics cookies to help us know how you use our website, which improves your online experience and our services.

Strictly Necessary Cookies: These enable core functionality such as logging in and volunteer search preferences. You may disable these by changing your browser settings, but this will affect how the website functions.