Beckie Knight-Croft, Director of Pathways at Bexleyheath Academy, organises keynote speeches once a term to inspire and motivate their key stage 4 (14-16 year old) and key stage 5 (16-18 year old) students. Beckie was looking for speakers to help encourage their students to think differently about career options and to introduce them to new job opportunities.

After reading about Founders4Schools in a blogpost from Broadband Security, Beckie used the free Founders4Schools service to search for and identify appropriate speakers to invite into the classroom. She decided to use Founders4Schools because she felt "it fitted in really well with our whole-school careers programme. I was able to choose the date of the event and target particular students to attend."

Beckie invited Ajay Chowdhury and Robert Gardner, both successful, local business leaders with entrepreneurial experience, whose current businesses generate over £149,000,000 in turnover to become the 2015 keynote speakers at Bexleyheath Academy. 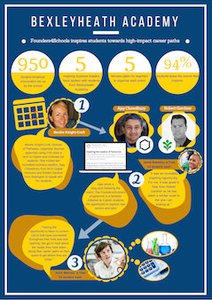 "Students who listened to the two CEOs speak were blown away by what they had to say" said Beckie when following interviews with students after the event.

"Having the opportunity to listen to current CEOs that have succeeded throughout their lives was eye-opening" said John Marney, Year 13 student. "We got to hear about the routes they have taken along their career paths on their quest to get where they are today."

Jared Baseley, also Year 13 student, felt that "it was an inspiring opportunity to listen to two people who have had very different career pathways. For me, it was great to hear from Robert Gardner as he has taken a similar route to the one I am looking at and it is was amazing to hear from Ajay Chowdhury about all the things he has been involved in, including founding Shazam!"

Ajay, who is currently a Partner at the Boston Consulting Group’s Digital Ventures, is a globally CEO with over twenty five years experience in mobile, e-commerce, digital media & retail and he has strong expertise in sales, strategy development, product development and fundraising. Ajay also wrote about the event and the importance of inspiring the next generationin this blog post.

Robert is Co-CEO of Redington, where he advises large pension funds around the world to implement better investment and funding outcomes. He also co-founded Mallowstreet, an online community for the pensions industry. He believes that education, collaboration and hard work are the best ways to tackle challenges.

"The messages delivered by Robert and Ajay, especially key themes around persistence and following your dreams, will make a huge difference to our students", said Beckie.

She thought that the opportunity to be exposed to professionals from the work environment did make a difference to the students' attitude for studying subjects like business: "it helps students determine what they want to do in the foreseeable future." 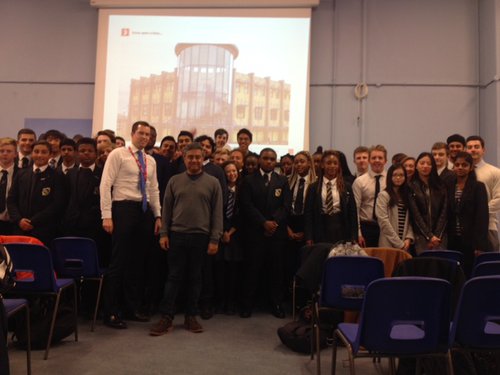 Would she recommend Founders4Schools to other teachers? The answer, a resounding "Absolutely!"

We use necessary cookies to make our site work. We’d also like to set optional analytics cookies to help us know how you use our website, which improves your online experience and our services.

Strictly Necessary Cookies: These enable core functionality such as logging in and volunteer search preferences. You may disable these by changing your browser settings, but this will affect how the website functions.